By Julie10 Comments
Three days before my bachelorette weekend I posted the following Facebook status update: “Trying to figure out what to pack for my Bachelorette this weekend. Bathing suit….blender….pina colada ingredients…I think I’m set right? #priorities.“

Clearly, I was envisioning a lot of sunny poolside action for our weekend in Palm Springs. It was the following day when I realized the forecast was….rain. Straight up rain. In the desert. Granted California is dry as hell and needs this rain, but wouldn’t it figure that this huge ass drought comes to an end on the weekend I had imagined chilling by the pool with my girls?

Last Friday, I drove (in the rain) to the house my dear friends rented for us. Within 30 minutes of my arrival, the power went out in the house. Upon inspection of the circuit breaker (in the rain, under an umbrella) we realized the problem was not a blown fuse. After checking the internet, it turns out that there was a power outage in the area. The power was scheduled to be back on at 7 p.m. No big deal.

While Leah, Cynthia and I waited for the other girls to arrive, we went out for a drink at the ACE Hotel (after driving by the broken telephone pole that was bound to be the cause of our lack of electricity). After picking up dinner, we headed back to the house to meet the other girls. I think it was around this time that we found out that the power outage was extended to 4 a.m.

So Leah and I went to the store to pick up candles, ice and a cooler. We lit tons of tea light candles, put them in glasses from the house’s kitchen, and placed them all over the house. Bedrooms, bathrooms, hallways, the kitchen. Everywhere. 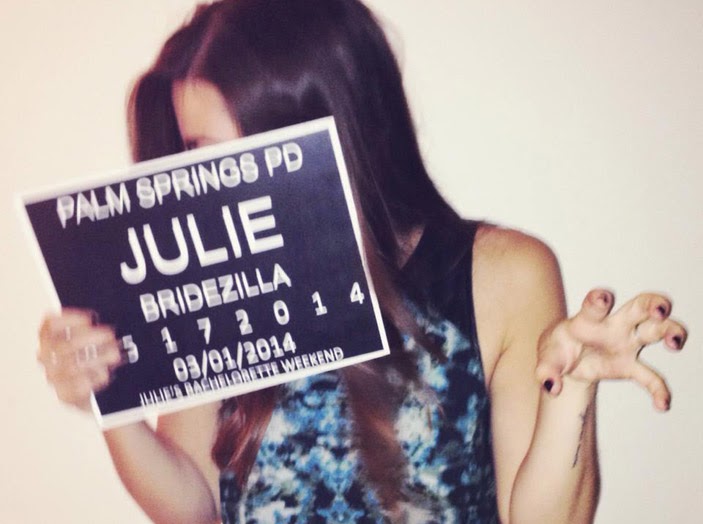 We spent our first night around the kitchen table, talking, laughing, and playing games under candle light. Romantic, huh?

Sometime in the middle of playing Cards of Humanity my friend checked her phone to get info on the power outage. “Oh my god!” she exclaimed, and I knew this couldn’t be good. She looked at me, and I knew she did not want to tell me….

No power until 3 p.m. on Saturday.

I tried to hide my disappointment. I felt like a dick (or maybe a bridezilla?!?) for being bummed out when my friends had put together such a special weekend for me.
By Saturday we were really feeling the lack of electricity. The freezer was leaking from melting ice. Phones were dying. Hair was frizzing without hair straighteners. We couldn’t listen to music. No morning coffee since the coffee machine didn’t work.
We joked we were glamping. It was Survivor – Bachelorette edition.
After going out for a delicious brunch, we spent the afternoon playing in the pool. We got a little bit of sun in the morning and took full advantage.
3:00 came and went. Still no power.
Despite this, it was time to move on to the bridal shower portion of the weekend. The girls decorated the kitchen all cute, prepared yummy food, and showered me with gifts (so much cute underwear!!). I got emo and was reminded how awesome my friends are. They were all such good spirits about the situation. We were all laughing, joking, and really making the best out of the situation.
After I finished opening my gifts, we all stayed sitting around the kitchen table. My friend Isabella spoke up, saying how she was worried about coming to the party because she didn’t know anyone, but that she was so glad everyone was awesome and nice. We all echoed this, it was a warm and fuzzy moment. And then…
“beeeep” and the lights come on.
We scream. We all jump up to our feet, arms above our heads, high-fiving each other. Probably the happiest bunch of girls there ever was.
It was like, the moment we finally stopped worrying about it, when we were just having a happy little moment, it happened.
We rushed to the bathrooms to get ready for a night out. We curled our hair like we had never curled our hair before. Big goofy smiles at ourselves in the mirror as we twisted that curling iron. Repeatedly exclaiming “That was awesome!” “That was perfect!”
Saturday night was a frickin blast. It was the perfect end to the weekend and just what I was hoping for. It made me so much more excited for the wedding because it’s just so special to be surrounded by people you love. What I felt so much that weekend, was how happy all these girls are for Jordan and I. The support we get as a couple is so special.

And, rain or shine, power or no power….it was definitely a weekend that I will never ever forget!