By Julie16 Comments
Yesterday’s Blog Everyday topic was “What do you miss?” I’m a day late, as I like to enjoy my weekends, but I still wanted to discuss this topic. Are you ready to get personal?

What do I miss? Time with my dad.

One day, soon after my freshman year of college started, my Mom called and told me that she was driving up to my college because she had something to tell me that “wasn’t good.” She assured me that my family was ok. “Nobody was in an accident or anything.”

Three hours later my mom arrived at my dorm and told me that my Dad wanted a divorce. We cried together. I remember my roommate walked in, got an awkward look on her face, and quickly went into the bedroom. I don’t remember saying much or asking questions. I didn’t know what I was feeling or how this was happening. After 20 years of marriage, a divorce is something I never saw in the cards for my parents.

The next few months are kind of a blur. My family would tell you that I handled the divorce “well” and I think it’s because I wasn’t around for it. Since I was away at college I didn’t witness what my parents went through. I guess I should be thankful for that.

One day, after the divorce was final, I was home from school and my grandma called. I remember her telling me my dad was “sick” for not “getting help” (marriage counseling). I’ll never forget that. She called him selfish. She told me I should be mad at him. It was then that I realized my mom’s side of the family was angry.  Maybe I was naive in thinking they wouldn’t be.

What my angry family didn’t see was my dad’s suffering. And honestly, I wish I hadn’t either. After the divorce my dad had no one. Backs were turned. He had no one to talk to. But me. I can tell you exactly where I was, who I was with, what I was doing, when my dad called me one night when I was at school. He was crying. I can’t explain how it felt to hear this. To hear my dad, the strong man in my life, show pain, suffering….instability, vulnerability. It threw my off my feet and I started crying as soon as I hung up the phone. My friends immediately surrounded me in a hug and that was really the first time since my mom initially told me about the divorce that I showed so much emotion. 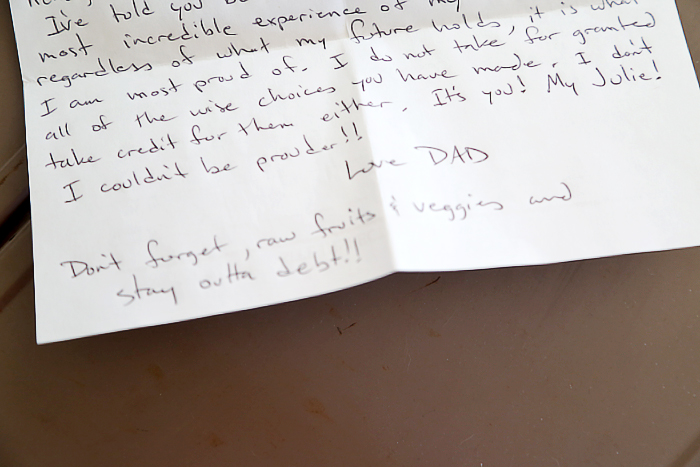 Since the divorce, I have seen a completely different side of my dad. He is so much more open with me about his feelings than he ever was when he was married to my mom. I know a part of him will always feel guilty for not being around as often after the divorce…not being able to “leave his influence” on me anymore. He is constantly reminding me how important I am to him, that raising me was the best experience of my life.

I’ve thought about whether or not I blame my dad for his decision. I’ve thought about whether or not I considered him selfish, as my grandma said. My dad was unhappy in his marriage. Should he have chosen to live unhappily for the rest of his life to make other’s happy? He stayed until I was 18. He waited until I went away to school. To make it easier on me. To be there for me until I moved away.

I can’t be mad at him for his decision. There is no grudge. But I do miss him.

Don’t forget! Google Reader is peacin’ out! Be sure to: